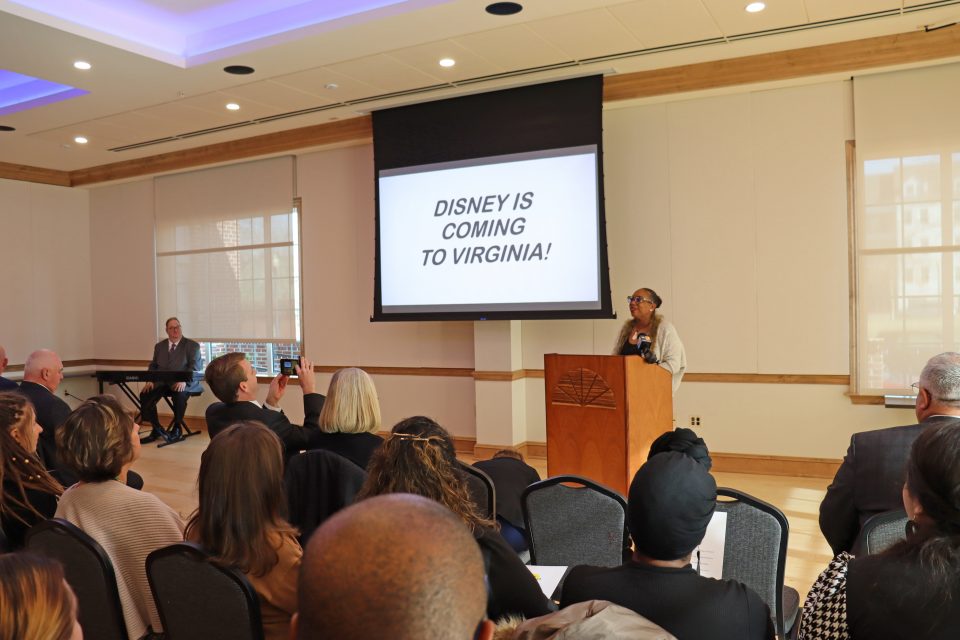 Virginia Repertory Theatre has been awarded a grant from Disney to bring Disney Musicals in Schools to Chesterfield County Public Schools. This is the first time Disney Musicals in Schools, which works to create sustainable theater programs in under-resourced elementary schools, has been connected to any school in Virginia. The Cameron Foundation and the Nunnally Foundation are also providing funding. (Virginia Rep received the Disney grant in 2020, but COVID-19 delayed the program until now.)

In partnership with Chesterfield County Public Schools, Virginia Rep selected these Title I schools to participate in the first year of the two-year program, which is provided at no cost to the schools: Bensley Elementary, Crestwood Elementary, Harrowgate Elementary and Reams Elementary. In the 2023-24 school year, plans are to continue with the first-year schools and add four new schools.

Benefits of Disney Musicals in Schools include the positive relationships that grow among students, faculty, staff, parents and the community. Students and teachers work in teams, developing the wide spectrum of skills needed to produce musical theater, including critical thinking, problem solving, ensemble building, communication, self-confidence and interpersonal skills.

“This is an outstanding opportunity!” said Dr. Mervin B. Daugherty, superintendent of Chesterfield County Public Schools. “Participating in the arts directly supports our mission of igniting passion in all through authentic and captivating experiences. We are grateful for this new partnership with Disney and Virginia Rep.”

Each of the four schools will select one of these seven Disney KIDS shows to perform: “101 Dalmatians,” “Aladdin,” “The Aristocats,” “Frozen,” “The Jungle Book,” “The Lion King” and “Winnie the Pooh.” Beginning in January, the schools will participate in a 17-week musical theater residency at no cost, led by a team of Virginia Rep teaching artists trained by Disney Theatrical Group. Students in grades 3-5 will be involved in on-stage and off-stage roles; two 90-minute rehearsals will be held each week. Teachers and other members on the school teams will each receive a $1,600 stipend for their work.

Each school will receive performance rights, education support materials and guidance from the teaching artists. Disney Musicals in Schools features a professional development focus, through which those on the school teams will partner with Virginia Repteaching artists to learn how to produce, direct, choreograph and music direct, culminating in their school’s first 30-minute Disney KIDS musical.

“Disney Musicals in Schools enables us to have a new approach to theatre education,” said Phil Whiteway, managing director for Virginia Repertory Theatre. “We have already been a local leader in providing theatre for children, but it has mainly been though our professional performances for children and families, or kids performing in our plays. Now, Disney Musicals in Schools lets us focus on providing the schools’ faculty with the training and tools necessary to support their student performances and productions, and to empower them to do so.”

In addition to performing the musicals for their students, staff members and parents, the four schools will perform during Student Share Celebrations at the Perkinson Center for the Arts and Education in Chester and at Virginia Rep’s new Center for Arts and Education, located in the former Scottish Rite Temple on Hermitage Road. During both Student Share Celebrations, each of the schools will perform several selections from their shows for an audience of students, teachers, family and community members.

Disney Musicals in Schools was launched in 2010 in response to Disney Theatrical Group’s concern that under-resourced public elementary schools were not afforded equitable access to the arts. After successfully offering the program in New York City schools, Disney Theatrical Group began partnering with organizations in other communities across the United States. With the awarding of the grant, Richmond becomes the 26th city to receive this international program. Disney KIDS musicals, created in partnership with Music Theater International, are 30-minute musicals designed for elementary school performers and have been adapted from classic Disney films.

Virginia Repertory Theatre is a regional professional theater headquartered in downtown Richmond and is one of the largest performing arts organizations in central Virginia. There will be two primary seasons in 2022-2023: the Signature Season at the Sara Belle and Neil November Theatre at 114 West Broad St. and the Barksdale Season at the Hanover Tavern at Hanover Courthouse Road. It will produce the inaugural production of “’Twas the Night Before Christmas” in the new Virginia Rep Center for Arts and Education located at 4204 Hermitage Road. Children’s theater productions, educational touring, camps, classes and workshops will be held in this new space. Virginia Rep also tours children’s shows, both virtual and live, and provides educational programming to schools throughout Virginia and to major performing arts centers throughout 32 states. In 2023, Virginia Rep will celebrate the 70th anniversary of its founding in Hanover County in 1953, with a variety of events planned to celebrate this anniversary, and to honor this milestone.

Disney Theatrical Group operates under the direction of Thomas Schumacher and is among the world’s most successful commercial theater producers, bringing live entertainment events to a global audience of more than 20 million people each year in more than 50 countries. Under the Disney Theatrical Group banner, the group produces and licenses Broadway productions around the world, including Beauty and the Beast, The Lion King, Elton John & Tim Rice’s Aida, TARZAN®, Mary Poppins, a co-production with Cameron Mackintosh, The Little Mermaid, Peter and the Starcatcher, Newsies, Aladdin, and Frozen. Other successful stage musical ventures have included the Olivier-nominated London hit Shakespeare in Love, stage productions of Disney’s High School Musical, Der Glöckner Von Notre Dame in Berlin, and King David in concert. DTG has collaborated with the nation’s preeminent theaters to develop new stage titles including The Jungle Book, The Hunchback of Notre Dame, Freaky Friday and Hercules. As a part of the recent acquisition of 21st Century Fox, DTP also heads the Buena Vista Theatrical banner which licenses Fox titles for stage adaptations including Anastasia; Moulin Rouge! The Musical; Mrs. Doubtfire and The Devil Wears Prada.

Music Theatre International is one of the world’s leading theatrical licensing agencies, granting theaters from around the world the rights to perform the greatest selection of musicals from Broadway and beyond. Founded in 1952 by composer Frank Loesser, and orchestrator Don Walker, MTI is a driving force in advancing musical theater as a vibrant and engaging art form. MTI works directly with the composers, lyricists and book writers of these musicals to provide official scripts, musical materials and dynamic theatrical resources to over 70,000 professional, community and school theaters in the United States and in over 60 countries worldwide.