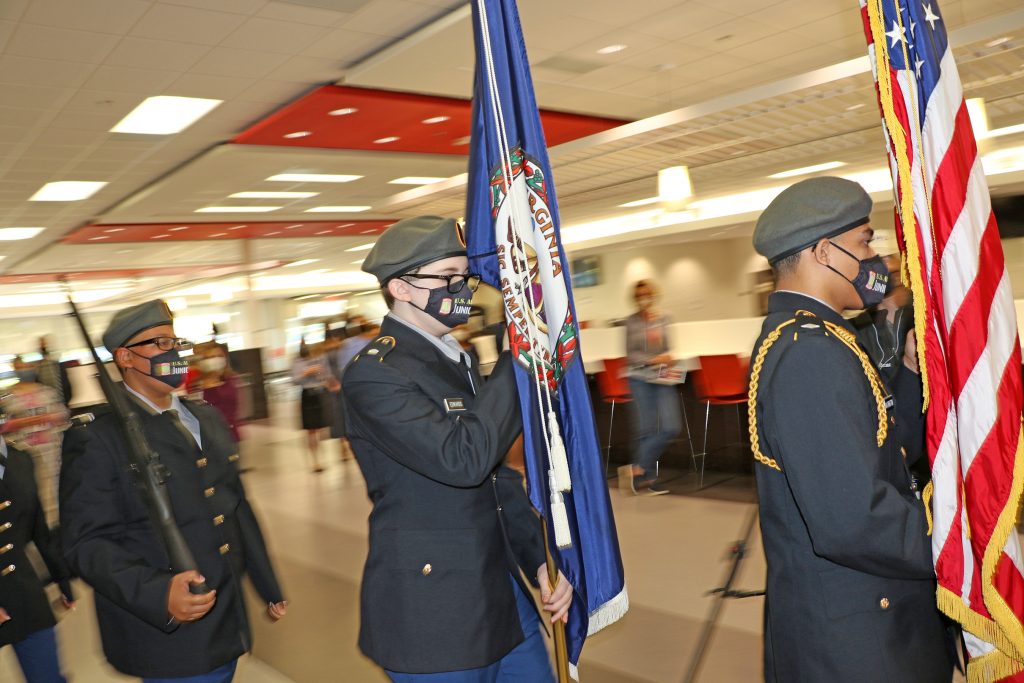 Chesterfield County Public Schools is committed to providing students with a safe, supportive and nurturing learning environment. There are many benefits to having students in school: from academic, social, emotional and mental health viewpoints. Our students and staff members are wearing masks and following COVID-19 mitigation measures. It is important that students and staff complete the daily health assessment before coming to school each day.

Even with masks, it is easy to see the joy of students and teachers who are finally able to come together again in the classroom. There is no doubt that everyone has grown weary with the pandemic, but we must remain vigilant to keep our kids safe and in school this year. Chesterfield County Public Schools works in partnership with the Virginia Department of Health and the Virginia Department of Education as our community, nation and world continue to navigate the COVID-19 pandemic.

We have developed a quick reference guide that shows an overview of what happens when there is a positive COVID-19 test. An FAQ document on our COVID-19 guidance page offers more details.

These topics were on the agenda when the Chesterfield County School Board and Board of Supervisors met together Sept. 8:

Superintendent Merv Daugherty set the tone for the forward-looking meeting by quoting Socrates: “The secret of change is to focus all of your energy, not on fighting the old, but on building the new.”

A new middle school campus would be constructed on county-owned property in Upper Magnolia Green, along the western U.S. Route 360 corridor, to relieve capacity issues at Tomahawk Creek Middle and address future student enrollment. Falling Creek Middle would be reconstructed on its current site with a larger, modern building that meets the needs of 21st-century education. Construction for each campus is expected to cost about $65 million, with plans to open both campuses by the start of the 2024-25 school year. Virginia Public School Authority bonds would be used, powered by Chesterfield County’s AAA rating.

“Students and staff at Tomahawk Creek Middle School have been in need of more space for some time, as have those at Swift Creek Middle. A new 360 West middle school will help ease the burden on both of those schools while providing a new state-of-the-art facility for our county,” said Dorothy Heffron, the Clover Hill District’s representative on the School Board.

“Now is the right time to replace Falling Creek Middle with a larger, 21st-century building,” added Dale District School Board member Debbie Bailey. “Despite renovations and improvements over the decades, it is showing its age. The new building will boost the community and reduce the need to teach students in trailers.”

The proposal also would effectively increase the school division’s share of the planned 2022 bond referendum by $130 million which, if approved by voters next November, will provide Chesterfield County Public Schools another $300 million to address capacity challenges and continue revitalizing aging buildings without having nearly half of that money tied up in just two school sites.

School Board Chair Ryan Harter, who represents the Matoaca District, said, “Chesterfield County families and our entire community value public education and believe it is the bedrock of a successful locality. We are known as a high-achieving, forward-thinking school system that works to do what is right for students. The schools proposed in the bond referendum signal a bright future — not just for our students but for the entire county.”

“Student enrollment is rising in Chesterfield, and we need to provide top-quality teaching and learning environments to affirm to families that they are making their home in the right place,” said Kathryn Haines, who represents the Midlothian District on the School Board. “The issuance of Virginia Public School Authority bonds and an expanded capital improvement program reflects our commitment to addressing growth with buildings, not trailers.”

The county recently announced plans to purchase and redevelop the Spring Rock Green shopping center at the intersection of Midlothian Turnpike and Chippenham Parkway. The new vision for the public-private partnership includes construction of a consolidated CCPS headquarters, which will allow the school division to bring central office employees under one roof and free space for career and technical education programming at the Career and Technical Center @ Hull. See this presentation here.

County and school staff are proposing to make a one-time, $27 million payment to a supplemental retirement program for Chesterfield County Public Schools employees — thereby eliminating the unfunded liability in its trust fund — and reallocate the school division’s future SRP contributions to pay off the new school construction bonds over time. This will position the school system to open the two new middle schools in fall 2024 and bring the supplemental retirement program to fully funded status several years earlier than expected. See this presentation here.

School Board Vice Chair Ann Coker, who represents the Bermuda District, said, “Having the SRP fully funded leaves no doubt about its long-term viability and will offer peace of mind to those employees who are nearing and reaching retirement age. We are also excited to get some much-needed relief in some of our over-capacity middle schools. New schools always bring excitement to the community they are built in!”

The $27 million will be funded from the county’s fiscal year 2021 operating surplus, which is larger than usual for several reasons: Chesterfield has seen a surge in state sales tax collections during the pandemic as more residents began telecommuting (and as a result, shopping and eating closer to the home) instead of driving to offices in neighboring jurisdictions. Likewise, revenue from residential real estate assessments has outpaced projections, fueled by unprecedented demand for housing in the county.

The county and school division have worked out an initiative to install synthetic turf on the main rectangular athletic fields at every Chesterfield County high school. The first two schools will be Bird and Monacan where new fields are expected to be in place for fall 2022 sports. The remaining fields will be part of the 2022 bond referendum. Switching to synthetic turf will increase durability and allow for dual use by schools and by the community, including sports tourism. See this presentation here.

Answers to your questions about college # 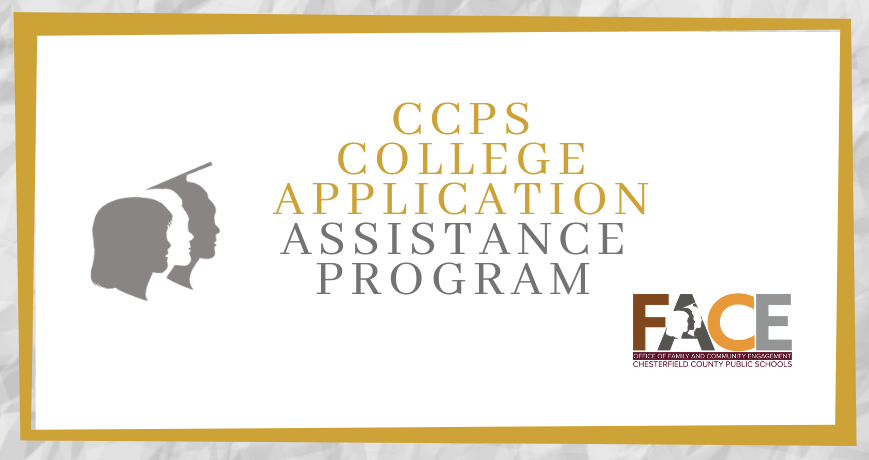 Get answers to these questions and more at a free College Application Assistance Program organized by the Family and Community Engagement Office of Chesterfield County Public Schools and the Chesterfield County Public Library. These 10 a.m.-noon Saturday sessions for high school seniors and families will be in-person at the Central Library (7051 Lucy Corr Blvd.) as well as virtual. Registration is required, so register here today:

GRASP representatives will be on hand to discuss financing options including scholarships. Other experts will offer tips for writing admission essays, securing letters of recommendation and building a resume with academics plus extracurricular activities. What do you have questions about? You can submit questions using this simple form. Finally, students and families can access helpful information about applying to college here.

Work where you can help young people succeed # 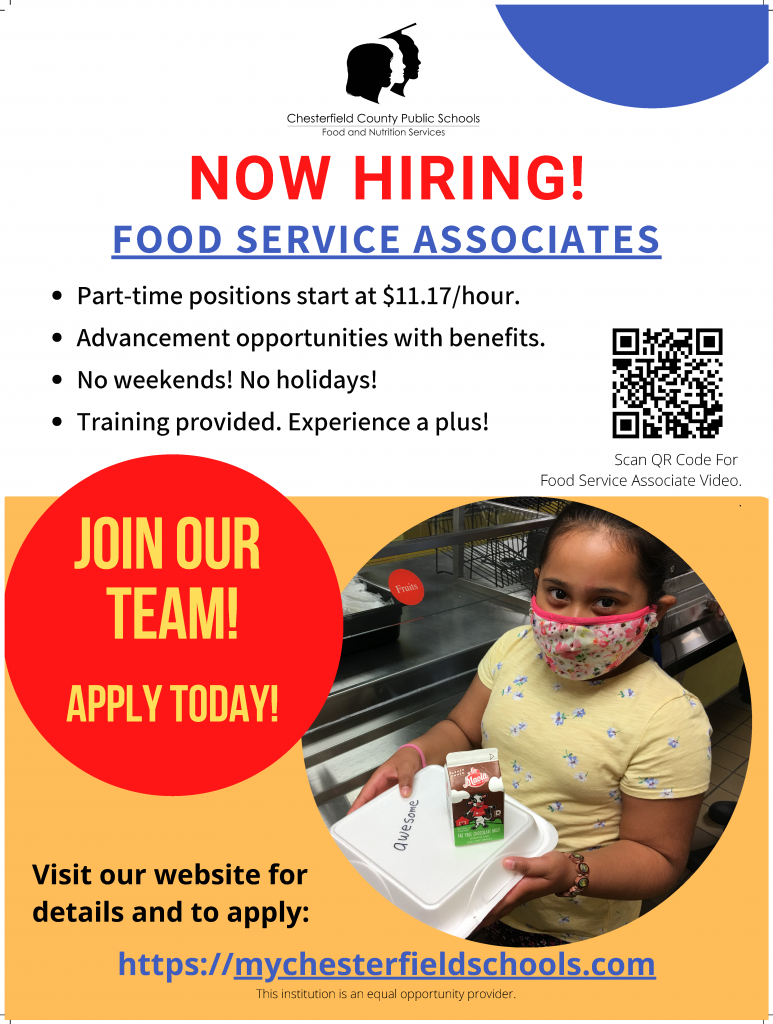 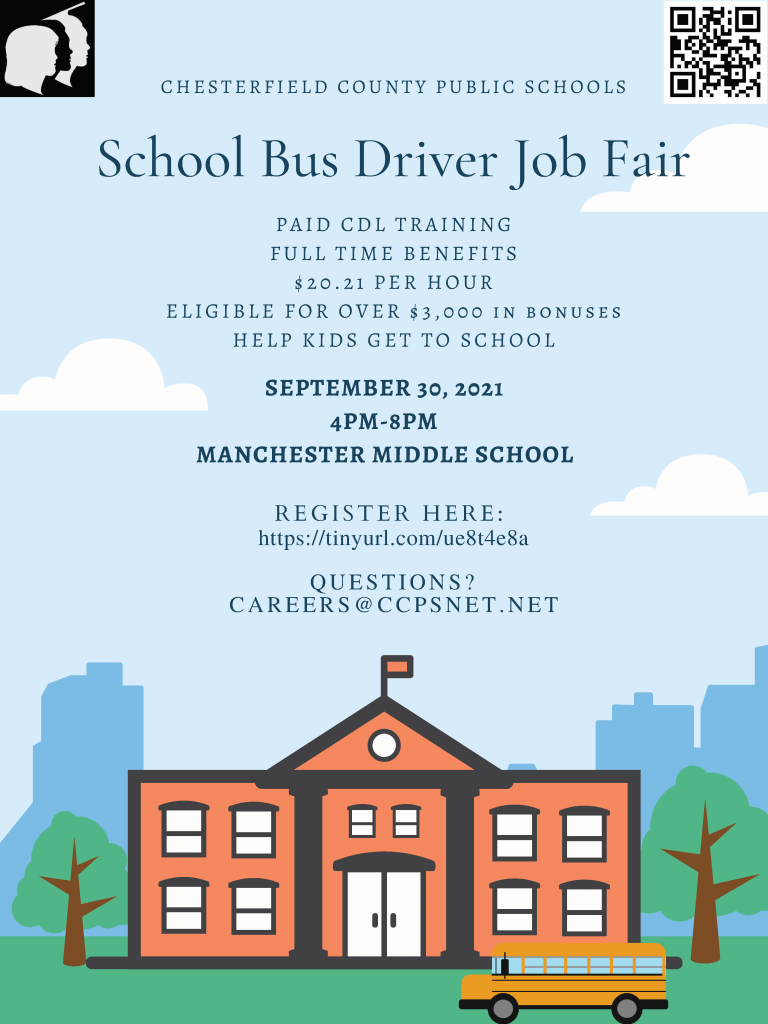 The calendar for Bellwood Elementary and Falling Creek Elementary (our year-round schools) includes these upcoming dates:

How to get school messages via text message #

Schools send info to parents by phone, email and text. Parents who want to receive texts (and who are not already receiving texts) need to take these two steps:

Log in to make sure your info is current in ParentVUE/StudentVUE. Our website has detailed information, including a helpful overview that shows how to log in. Instructions are also included on updating the ParentVUE and StudentVUE mobile apps. Using ParentVUE, parents are also asked to check/update your home address, any alternative addresses and how students travel to and from school. All families are asked to update this information, even if your student will attend school virtually during the 2021-22 school year. Additionally, if your child would like to be called by a nickname, you can include that information in ParentVUE as well. If you need help accessing ParentVUE or updating your home address, contact your child’s school.

Tech It Out offers resources for families # 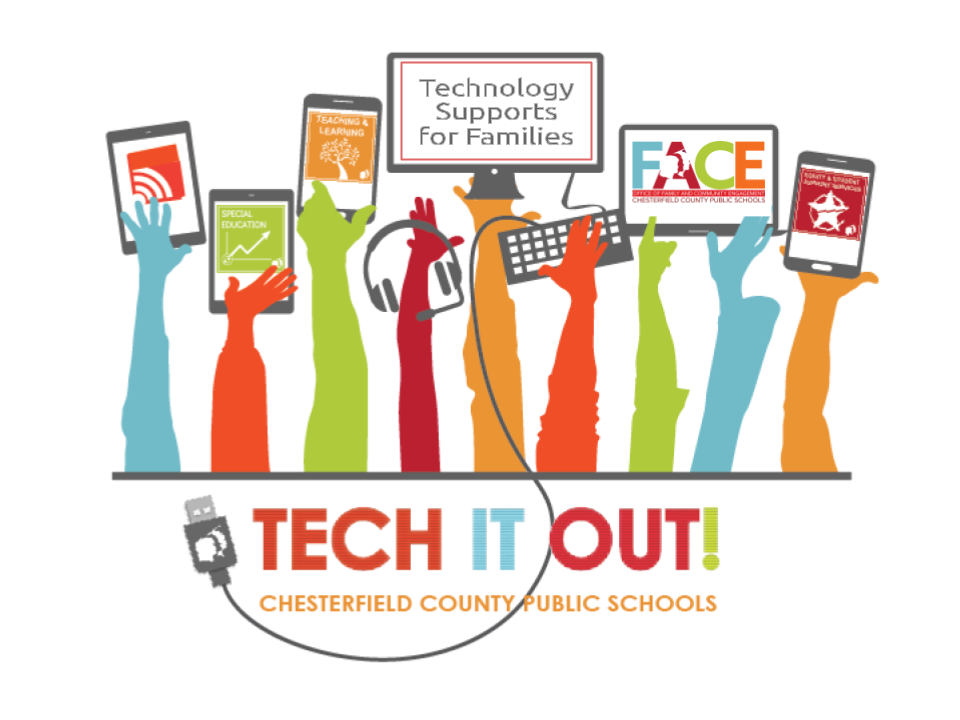 Sept. 20 event for parents of children with disabilities #

Are you the parent of a child with disabilities? Could you use a road map or some guidance? This disability resource fair and conference can help, so reserve your free tickets today at rebrand.ly/destinationlife. Scheduled 5-8 p.m. Sept. 20 at CTC@Hull (13900 Hull Street Road), Destination Life offers relevant resources, information and support for parents and teachers of children with disabilities. School transitions, organization, autism, dyslexia and social skills are among the topics. Young Life Capernaum, PEERS RVA, Down Syndrome Association of Greater Richmond and other vendors will offer resources. 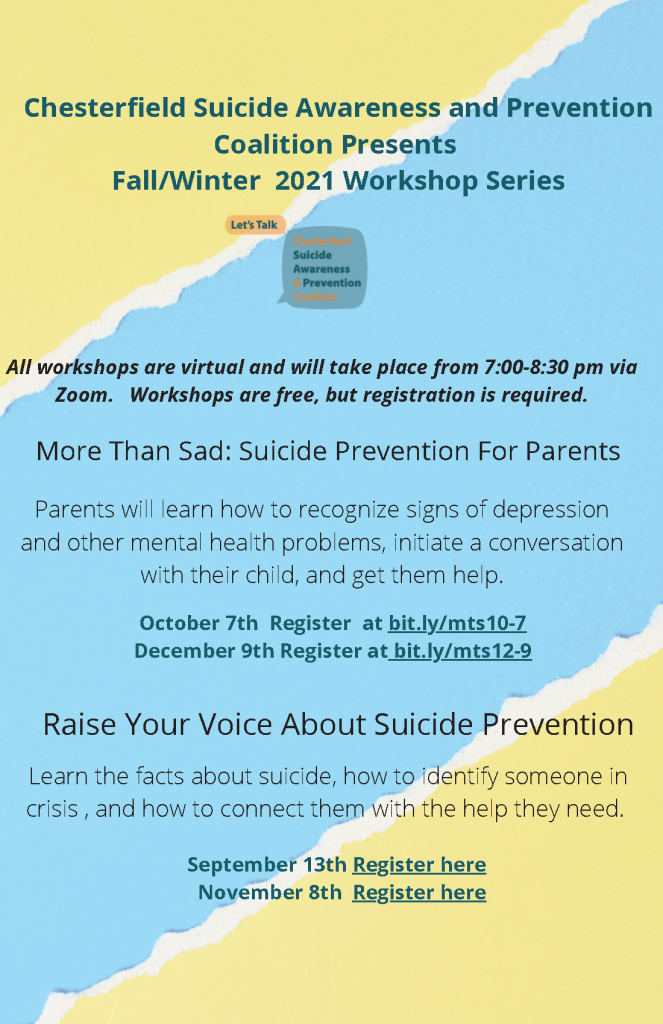 In Raise Your Voice About Suicide Prevention, parents will learn to recognize signs of depression and other mental health problems, initiate a conversation with their child and get them help.

In More Than Sad: Suicide Prevention for Parents, participants will learn the facts about suicide, how to identify someone in crisis and how to connect them with the help they need.

The Virginia Space Grant Consortium provides free science, technology, engineering and math opportunities for Virginia students in grades 10-12. The programs inspire students who possess technical or scientific interests and are motivated to learn about the many different opportunities that NASA offers. Details are here.

Eyes Above the Horizon # 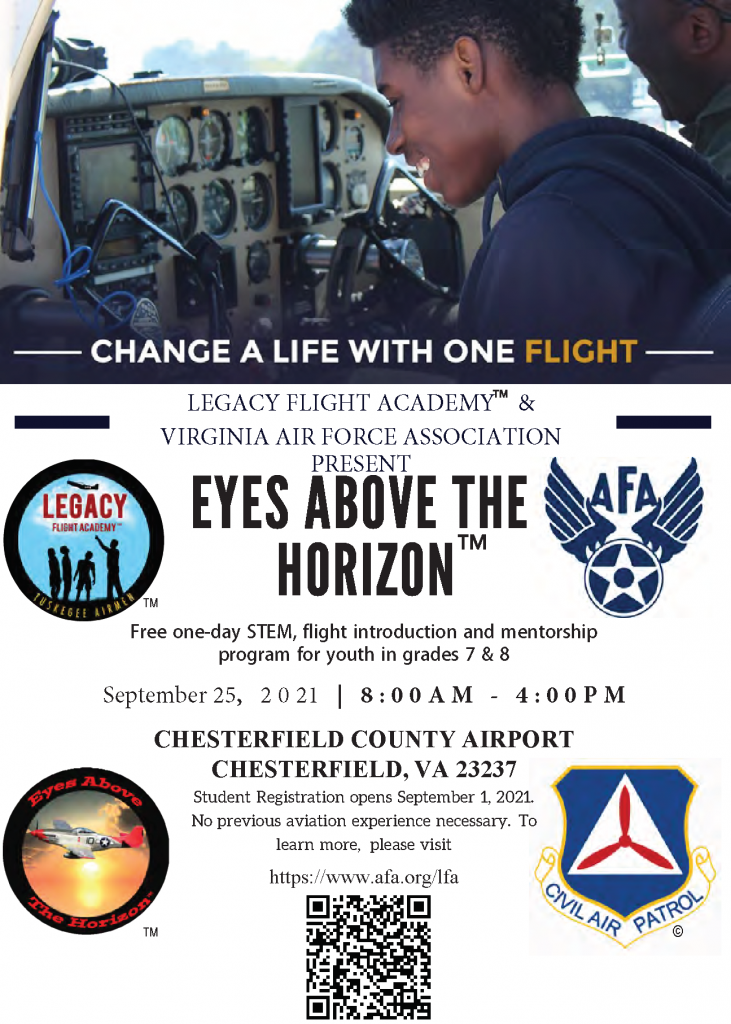 Eyes Above the Horizon offers students a chance to fly a single-engine plane! This unique outreach seeks to inspire youth, especially those from underserved and underrepresented communities, to consider STEM and aviation career opportunities.

The Virginia Air Force Association is partnering with the Tuskegee Airmen Legacy Flight Academy for this event for grades 6-8. Eyes Above the Horizon will take place 8 a.m.-4 p.m. Sept. 25 at the Headquarters Building of the Virginia Wing Civil Air Patrol at the Chesterfield County Airport. Space is limited, and registration is required. Activities include an orientation flight in a single-engine airplane where students will actually fly an airplane (with parent permission), academic instruction in STEM,  lunch and mentorship from civilian, commercial and military aviation role models.

Bring out your denim # 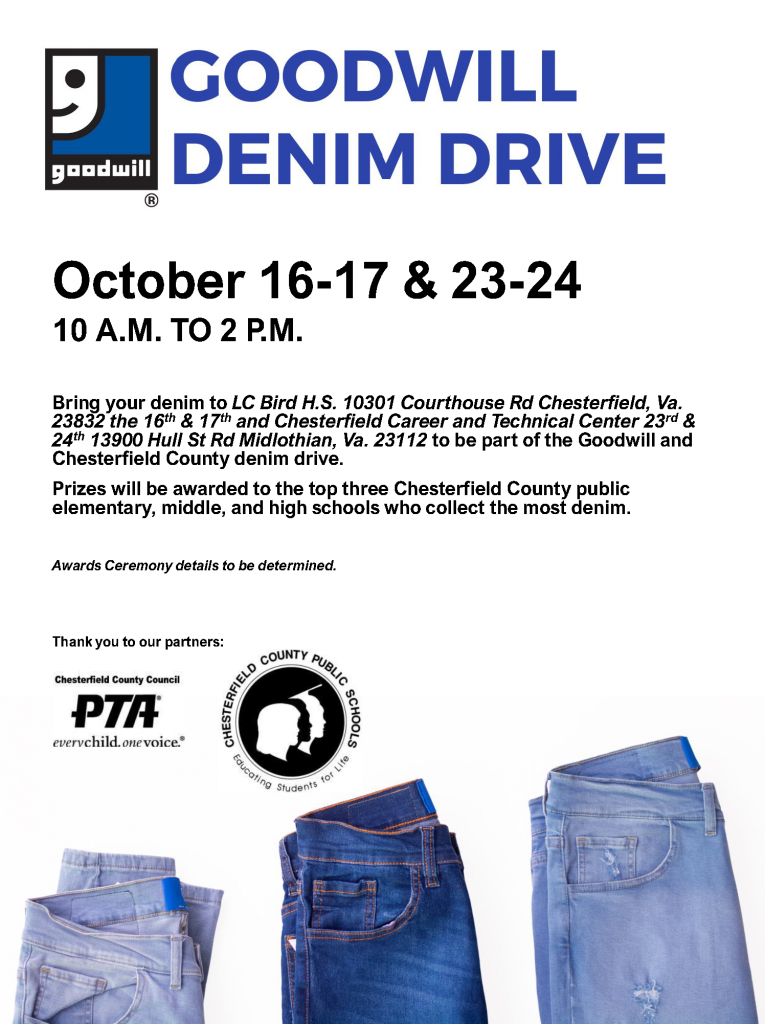 The Denim Drive is set for October. Here’s how it works: Families donate used denim clothing of all kinds. Goodwill weighs the denim donated on behalf of each Chesterfield County school, then awards nine cash prizes ($1,000, $750 and $500) to the top three elementary, middle and high schools. The denim is sold in Goodwill stores or recycled. Collection dates are 10 a.m.-2 p.m. Oct. 16-17 at Bird High School (10301 Courthouse Road) and 10 a.m.-2 p.m. Oct. 23-24 at CTC@Hull (13900 Hull Street Road). Sponsors of this event are Goodwill of Central and Coastal Virginia, Chesterfield County Council of PTAs Chesterfield County Public Schools.

Still stuck? How can we help?

How can we help?