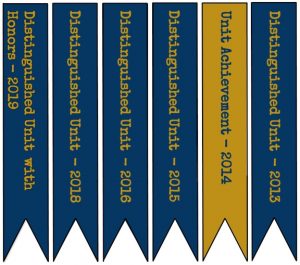 James River High School NJROTC was commissioned in 2009 with CDR Greenwald and Petty Officer Davis as SNSI (Senior Naval Science Instructor) and NSI (Naval Science Instructor) respectively. Since then, the unit has grown in both size and prestige, earning the status of Distinguished Unit in 2013, Unit Achievement in 2014 and Distinguished Unit again in 2015 and 2016, under the leadership of Chief Petty Officer Brian Mack, who replaced PO Davis after his move to South Carolina. At the end of the 2015-2016 academic term, Chief Mack was selected for training as a Chesterfield County Firefighter. He still makes sure to support the unit in any way he can, such as attending unit competitions, but due to his rigorous training schedule he is unable to continue as our NSI. His position was filled by Colonel Bill Barrett, US Army (ret.) until January 2017, when Master Chief Steven Prince, a former preacher and published author, stepped up to fill the position.

The unit strives to live out the Navy’s core values of “Honor, Courage, and Commitment” in everything we do, including performing community service, providing ceremonial color guards for events, competing against other units in military drill, physical training, “Raiders” events, orienteering, air rifle marksmanship, academics, and uniform personnel inspection (UPI). In fact, 2016 marks the first year (of what we hope will be many) that the JRHS Drill, PT, and Academic teams ranked in the top ten schools in Area 5 – which consists of all NJROTC Units in Virginia and Maryland – earning the unit a place at the prestigious Area 5 Drill, Field, and Academic championship in Norfolk, Virginia. The Academic Team proceeded to place second out of all 57 units in Area 5, a truly impressive accomplishment.