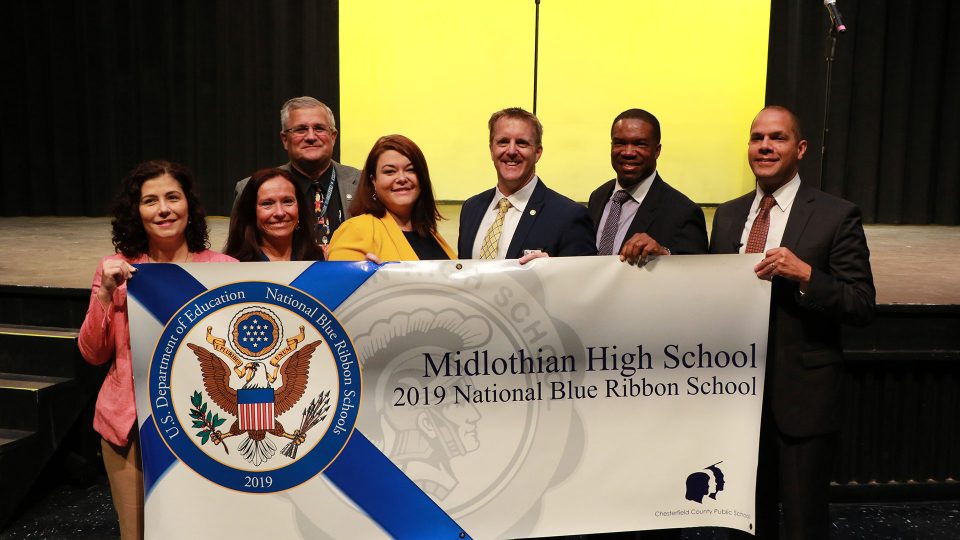 The U.S. Department of Education today named Midlothian High School a National Blue Ribbon School, one of only 362 schools out of approximately 135,000 public and private schools to be honored with this recognition nationwide.

“This independent validation of the great work occurring at Midlothian High School reaffirms what we have known for a long time: That students attending this school are receiving a rigorous education that prepares them for successful futures,” said School Board Vice Chair Dr. Javaid Siddiqi, who represents the Midlothian District. “Congratulations go to the students, families, teachers, administrators and the entire Midlothian community for achieving this national recognition. They truly personify a community of excellence.”

A fully accredited school, Midlothian High enrolls approximately 1,800 students in grades 9-12 and has had tremendous success preparing students for their future. The school’s most recent on-time graduation rate was 99 percent. Midlothian’s passing rates on Virginia Standards of Learning tests taken during the 2018-19 school year were:

“While test scores should not be the only judgement of success, it should be noted that the school’s performance on state-mandated assessments far exceeded state averages,” Superintendent Dr. Merv Daugherty said. “I commend Midlothian students for putting in the hard work it takes to achieve that success and the faculty for challenging students to do their best. They are creating amazing learning experiences in a remarkable learning environment.”

The U.S. Department of Education will honor all of the nation’s 2019 National Blue Ribbon Schools during a conference and awards ceremony later this school year in Washington, D.C.